Ezekiel was among the 8,000 Jews exiled to Babylonia. Although much of his time was spent criticizing the behaviour of the Jewish people, this body of text was a declaration of hope for the future. Ezekiel described the duties of the kohanim and the rules they had to abide by. In this way he bolstered the confidence of the exiled children of Israel, convincing them that they would return to Israel.

The painting for this haftarah shows the Kohen Gadol in his robes, two ancient artifacts from Temple times, and text from the haftarah describing the clothing of the kohanim. The full description of the priestly clothing can be found in the Book of Exodus,  ch. 28: 2- 38. The detailed description is prefaced with the remark, “And you shall speak to the wise-hearted, whom I have filled with the spirit of wisdom, that they make Aaron’s garments to sanctify him…”  (I always love the way HaShem has imbued artists and crafts people with wisdom and wise-heartedness.)

The ivory pomegranate is famous. 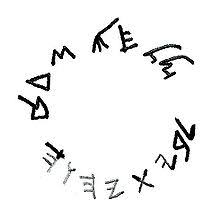 Made of hippopotamus bone, it appeared in the antiquities market s in 1977, and was bought by the Israel Museum in 1988 for $55,000. It has an ancient inscription on it reading, “(Belonging) to the House of “Yahweh”, Holy to the Priests.”  There has been some controversy as to whether the ivory pomegranate is a fake or not, but the most recent opinion seems to advocate its authenticity. If you want to read an interesting article about it go to:  http://www.biblicalarchaeology.org/scholars-study/is-the-ivory-pomegranate-a-forgery-or-authentic/

The gold bell I included in the painting was found in Jerusalem, July 2011,  while I was designing this haftarah illustration.

The tiny bell was found in an ancient drainage channel under Robinson’s Arch, right by the Western Wall. In the description of the priest’s robes it says, “And upon the skirts of it thou shalt make pomegranates of blue, and of purple, and of scarlet, round about the skirts thereof; and bells of gold between them round about.” (Exodus 28: 34,36). So – this tiny bell was probably sewn onto the hem of the priest’s robe, alternating with tiny pomegranates. If you want to read more about the find you can go to:

This haftarah was a promise from God. He said, “they shall enter My sanctuary and they shall come near to My table…” It reminded the Jews that they were not forgotten, and they would one day return to Jerusalem and to the Temple.

Have a great week,