It’s that time of year again, the count down to the holiest days of the year, Rosh HaShana and Yom Kippur.

The Shabbat between Rosh HaShana and Yom Kippur is called “Shabbat Shuva” meaning “The Shabbat of Return”. The first words in the haftarah are, “Return (shuva), Israel, to the Lord your Gd…”  The words direct our thoughts to introspection. Later in the haftarah, in the book of Joel, it says, “Blow the horn in Zion, sanctify a fast…” The illustration for this week shows a leader blowing a shofar. People of all colours- representing people from different corners of the world- are hearing the shofar. Above them is the hand of Gd surrounded by flames, representing Gd’s presence. This illustration is based on a wonderful painting by the American Artist Ben Shahn. Shahn was born in Lithuania and came to America with his family in the early 20th Century. His life was dedicated to human rights and social action, and he expressed that through his prolific art works.

Social responsibility and expression through art is part of our history. This summer my family and I were lucky enough to go to Israel and to Prague, an amazing jewel of a city in the Czech republic. The streets are lined with beautiful, beautiful buildings. Everywhere we turned there were sculptures, embellished doorways, and decorative columns. The curving streets showcased colourful homes and eye catching balconies and windows. 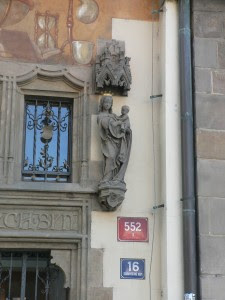 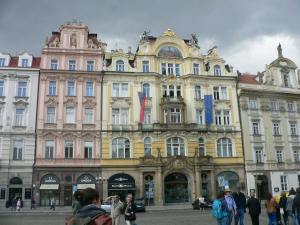 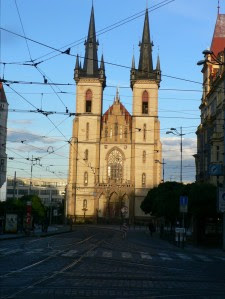 We walked the streets and looked at the six synagogues there, synagogues that had been built throughout the centuries. The oldest is the “Alte Neu Schul” (Old New Shul) built in 1254. Two legends surround this amazing medieval structure. One is that the wings of angels transformed into doves to protect the synagogues from fire in the ghetto. The other is that of the famous “Golem” . The story is told that the Maharal, Rabbi Loew, created the Golem out of clay in order to protect the Jews of Prague. It is said that the Golem’s remains are in the attic (but we didn’t see the Golem or his remains).

The newest synagogue was built in 1906 and is breathtaking, inspired by Moorish architecture. It was built as a Reform synagogue and has an immense organ in it.  Two of Prague’s six synagogues have regular services and two of the synagogues are museums to the Jews lost in the Holocaust. 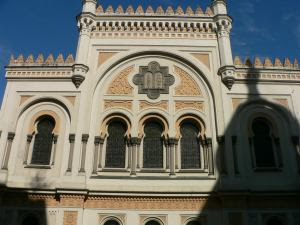 The beauty of Prague and the long history of Jews there was put into stark relief by our trip to the Terezin work camp/ transit camp/ ghetto 45 minutes outside of Prague. Walking through the camp where thousands of Jews had walked was more than sobering, and I have yet to integrate my impressions and emotions. Thousands of deported children, infants, women, and men walked those roads and through those doorways. But through the impossibly dark situation art flourished. Painting, theatre, music and composition were produced. Operas and plays were written and performed. Children published weekly newsletters. Although the circumstances were devastating  hope, faith and beauty survived. We saw hundreds of beautiful watercolours and drawings as well as original musical scores and even intricately crafted hand-made dolls. How inspiring!

Prayer was elevated too. A small  synagogue was built in secret. A man named Artur Berlinger decorated a storage room, painting designs and Hebrew quotations on the walls.  He led services there for a small group that lived on the same street. Below you can see stars painted on the ceiling and candles painted on the walls. The wall decoration ws intact until the flood of 2002 damaged them. 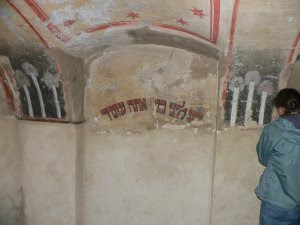 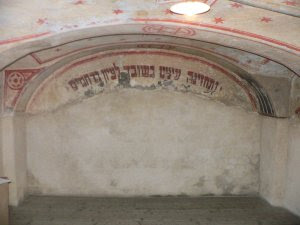 Art, music and creativity help make the world a brighter place.  They bring comfort to the creators and designers. The art can bring ideas, pleasure and even escape to the audience. Positive action, good deeds, political awareness- all these things are important too. So however you approach these holidays, may this be a time for reflection and creativity..
What do you think? I’d love to read your comments.
Shabbat Shuva Shalom,  Laya