Once Upon a Time

The stories we read to children often begin with that catch phrase, “Once upon a time”.  It is a signal that we are starting a new adventure, taking a path into an world filled with mysterious landscapes, unfamiliar people, and unknown experiences. But there is one very popular book that begins with, “In the Beginning…”

Last week we reopened an old book (or scroll)- the Torah, ready to start reading it once again from the beginning. In just one week we read about the creation of the cosmos, the rising of the mists and grasses from the earth and the emergence of human kind. We were pulled into jealousy, and the consequences of it with the recounting of the first murder.

The stories we read in the Bible/ in the Torah are written in a very spare style. A few well chosen words paint an entire scene . Without even realizing it we imagine a landscape and the details of an interaction. We build a rich novella based on a few short sentences.

This week, in parshat Noah, we read about the lives in a country or world beset by immorality, disdain for human life and a lack of decency. We also read about a Gd who makes an agreement with mankind. The promise is illustrated in a magical, wondrous way. Gd bends light and shows all the colours in the world to the mortals who walk the earth. That beautiful sight- a half circle of colour in the sky after every rainfall- is the symbol Gd gives humanity to remind humans of Gd’s pledge. 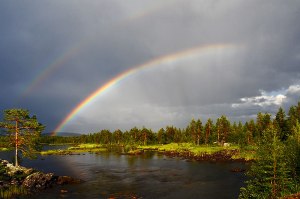 Of course- this is just the beginning. We have hundreds more stories to read and hundreds more lessons to learn and adventures to take. So settle down with the “good book” and enjoy.

Fun facts:Number of copies of the Bible published? 5 – 6 billion

The full Bible has been translated into 554 languages, and 2,932 languages have at least some portion of the Bible.

Have a great week and a great Shabbat,