“Willows and Water” by Laya Crust

This week we read the first parsha in the Book VaYikra- the Book of Leviticus. VaYikra means “and He called”. The English name, Leviticus, is a Latin word meaning “from the Levites”. The theme of Leviticus is one of holiness, and holiness is described in different forms throughout the book.

At the time of this haftarah the Jews were in exile. They were worn down, defeated, and turned from God to worship idols. Isaiah told them that God had noticed the abandoned the altars and sacrifices. Even though they were offering sacrifices to man-made gods. God told the Israelites He would not abandon them.  He said, “Even as I pour water on thirsty soil and rain upon dry ground, So I will pour My spirit on your offspring”.

I wanted to show that although the Jews had forgotten God, He is waiting for them to return and resume their observance of God.  In the text God said, “And they shall sprout like grass, Like willows by watercourses…”  In my haftarah painting at the top of the page there is a willow tree by a river. Although there are sheep grazing in the background, abandoned altars overgrown with grass are in the foreground. God waits until the Jews return and and then He will bless them and their children. 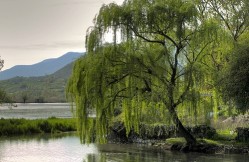 On a historical note, many scholars think the Book of Isaiah was written by more than one person. Dating back to the 12th Century Rabbi Avraham Ibn Ezra was convinced that chapters 40 – 66 were written by one or more prophets who lived in exile in Babylon, after the destruction of the the Southern Kingdom. That would have been about 150 years after Isaiah died.  This second section is often called “Deutero Isaiah” or “Second Isaiah”.

I hope you enjoyed the artwork and the post.  Many people have asked when I am going to turn my haftarah paintings into a book. I have decided to take the plunge and I’m working on one right now. I’ll keep you posted on how things progress.

Shabbat Shalom, Happy new month of Nissan, and all the best,

2 responses to “VaYikra: Willows and Water”