Mattot and the Three Weeks

This week we observed the Fast of the 17th of Tammuz, the beginning of the Three Weeks of mourning. The haftarah readings during the three weeks  include sections from the book of Jeremiah and the book of Isaiah.  Mattot is the first of the three readings, introducing us to the prophet Jeremiah.

Jeremiah warned B’nei Yisrael that they were going to be punished for their idol worship. He told the people  the Temple would be destroyed and they would be exiled  but the Israelites ignored him.  At the end of his life, in 586 BCE, Judah was destroyed and Jerusalem was sacked by Nebuchadnezzar. The majority of Jews were exiled to Babylon.

The haftarah describes Jeremiah’s conversation with Gd. The prophet’s mouth is touched by Gd’s hand, and then he successively has a vision of a flowering almond branch and a boiling cauldron. This is reminiscent of Isaiah’s mouth being touched by an angel. The almond branch represents Jeremiah’s link to Aaron the kohen and the boiling cauldron from the north represents destruction coming from the north.

Jeremiah tried to warn the Jews about the destruction of the Temple and their fate at the hands of their enemies but the Jews wouldn’t believe him.

I tried to think of a parallel situation where a Jew tried to warn his brethren of upcoming disaster to the nation but he or she was ignored. I remembered two individuals who lived at the time of the Second World War and attempted to rally Western Jews to put political pressure on their governments and spur them to save the Jews of Europe.  M.J. Nurenberger  was a journalist  who attempted to mobilize individuals and organizations to fight for the survival of Jews under the Nazi regime.  He wrote, met, and organized tirelessly but met with political stonewalling.  He wrote a book about his experiences called “The Scared and the Doomed”.   Arthur Szyk, an artist, used his art  to disseminate the message of Nazi goals and brutality. There are messages in his political cartoons, illustrated Haggadah and illustrated megillot. 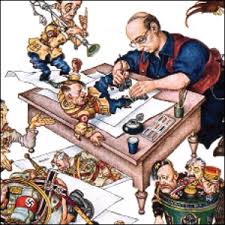 We are always at risk it seems- look at what is happening in Israel and Europe today. There are those visionaries who try to help and warn us. May we see a sustained peace for Jews, Israel,  and all humanity soon.

On a side note,  there is a program pairing people with soldiers and people on guard duty in Israel called The Shmira Project. Go to http://www.shmiraproject.com/SignUp.aspx.  You then pray and/or perform mitzvot with that soldier in mind, asking G-d to answer your good deeds with protection for that soldier.  (My soldier’s name is Noam ben Nicole.) There is no charge, and it takes 30 seconds to sign up.

Shabbat Shalom, and may these three weeks be for healing and peace.