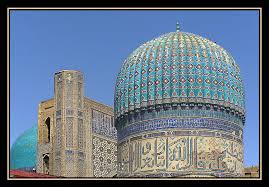 I’ve been away for a few weeks. My traveling partner, (Les, my husband) and I went on a wonderful trip to Uzbekistan. Attending lectures by Shalom Sabar about the Jewish cultural history there and seeing the incredible historical architecture was amazing.  I’ll be introducing some of that adventure in future blogs.

This week’s parsha is Toledot  (Generations). The parsha deals with the birth and sibling rivalry of Esau and Jacob- the twin sons of Rebecca and Isaac. Those babies were fighting even before they were born, to the point that Rebecca asked God what was going on with her pregnancy.

Esau loved being outside and hunting while Jacob stayed home, cooked, and according to the commentaries learned Torah. Esau traded his “birthright” for a bowl of Jacob’s soup – showing Esau’s impatience and disregard for tradition, and also showing Jacob’s desire to take advantage of his brother. The climax of the story is Rebecca and Jacob’s deception of Isaac. Rebecca convinces Jacob to masquerade as his brother in order to fool Isaac into giving Jacob the special blessing for the first born.

The story introduces all kinds of questions and puts flawed family dynamics into relief. Why did Isaac favour Esau while Rebecca favoured Jacob?  Why did Rebecca fool Isaac instead of talking to him? Was Isaac really taken in by Jacob’s deception? Maybe he suspected the truth but realized that Jacob was more suited to the blessing. Did the two brothers end up with the fates that most suited them in the long run? Esau would be a man of the field and Jacob would become the leader of the nation of Israel.

What seems to hold true is that poor family dynamics and communication skills certainly continued from generation to generation.

This picture shows the “family dynamics” of Isaac, Rebecca, Esau and Jacob. We see the blind Isaac blessing his son Jacob- having been fooled into thinking he is blessing Esau. Rebecca is delaying Esau from coming in until the blessing is complete. Rebecca is doing this because God had told her, when she was pregnant, that “the elder shall serve the younger”. She wants to ensure that the prophecy comes true.

The commentators had a very negative view of Esau because of his clashes with Jacob.

Esau settled in Edom, south of Judah and ultimately Edom was identified as the enemy of Israel and the ancestor of Rome- the bloody tyrant that destroyed the Temple and the land of Israel.

The haftarah is Malachi  1:1 -2:7. The prophet Malachi lived in Jerusalem during the 5th century B.C.E. after the return to Judah from exile in Babylonia in 538 BCE. In this haftarah Malachi is reprimanding the Jews for not observing the practices properly. He tells them that G-d loves His people- but they must stop making inferior sacrifices to God. Edom, the descendants of Esau, are mentioned as the tyrannical enemy.  I suspect that Esau was vilified through the guise of Edom and then Rome to make it easier to identify the source of Jewish oppression.