The story of Noah is a favourite for children’s book illustrators. (I will include a list of some of my favourite Noah’s Ark books at the end of this blog.)

A dove and a raven have leading roles, and we can imagine all kinds of fantastic exotic and not so exotic animals tumbling out of the ark. Coming out in a disorderly fashion (they’ve been cooped up for a looooong time) they smell the fresh air and gaze at the beautiful rainbow in the sky. They accept and appreciate Gd’s promise that there will never again be a flood that will destroy the world. And long-suffering Noah who has worried about his family and cared for the animals is now free to plant vegetables and fruit groves.

We think of it as a joyful story but in truth, it is a very heavy one.

Noah lived in the tenth generation after the creation of the world. His father named him Noah נח, from the verb ינחם, comfort or console. During that time people behaved sinfully and with moral depravity. But Noah was, as mentioned, a righteous man, and at the beginning of this week’s parsha it says that Noah walked with Gd.

There has been much discussion about whether or not Noah was truly a righteous man, or whether he was only righteous when compared to the others of his generation. Looking at the basic text we notice that Noah did not take initiative. Although he didn’t do immoral things he didn’t reach out to others in order to model his behaviour. He built the ark but didn’t ask questions. He was told to put animals into the ark but he himself didn’t gather them. Instead, they came to him. He may have walked with Gd, but he didn’t talk with Gd, as did his ancestor Adam or his descendant Abraham. The first time he spoke in the text is when he cursed his son Ham.

The story of Noah is a story of isolation. Noah was isolated from the society around him. He was a righteous man who walked a righteous path. His lifestyle was foreign to those around him. He seems to have been isolated fro his family as well. When he boarded the ark he walked on “with his sons, his wife, and his sons’ wives”. (Gen. 7:7) This is notable because he didn’t walk with his wife. He walked with his sons.

After the flood, when the waters had receded, Gd told Noah to “Get out of the ark with your wife, your sons, and their wives”. (Gen. 8:16) Gd specifically enjoined Noah to partner with his wife, his helpmate, his עזר כנגדו. But once again “Noah went out, together with his sons, his wife, and his sons’ wives”. (Gen. 8:18) The text continues stating that the animals “departed from the ark in family groups“. (Gen. 8:19) So it seems that Noah kept himself isolated emotionally from his wife and this was passed on to his sons. It doesn’t say they departed from the ark in family groups.

The Book of Genesis is a description of the beginning of our universe and our nation. Our religion is family and community-based. The stories in Genesis chart the growing pains of family and community. Noah may not have been a communicator or a man who cared about his family and his legacy. But he knew what was moral and what was not and ran his household in that way. That is what Gd saw in him as the progenitor of the new nation.

Noah’s standards of behaviour were passed down through the generations to Abraham, also a man who walked with Gd. In addition, Abraham cared about his wife, his sons, and the strangers who passed by his tent.

When we read the delightful Noah’s ark books to our children and grandchildren we leave out the dark parts. But Noah faced that darkness, lived through it, and was able to expose the light enough for Abraham to take on the next chapter of our legacy.

Have a Shabbat Shalom. May we have peace, and just the right amount of rain.

Making pop-ups is one of civilization’s happy and magical activities. Take a simple, small, flat piece of paper. Then take a pair of scissors. With a few well placed snips you can create a three dimensional adventure!

Halfway Up the Stairs by A.A. Milne.    Published 1925, Macmillan and Stewart

I love this little poem and decided to make it into a little pop-up card/ book.  I will walk you through the steps.

The process isn’t complicated, but it may take a few tries…. This picture shows my initial efforts. 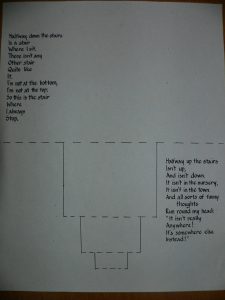 First, I made a model on an 8 1/2″ x 11″ sheet of paper.Fold the page in half, along the dotted lines.   Following the solid lines cut through the folded paper.

Setting the page down, pattern side up, cut through the folded paper along the two solid lines:

Fold the dotted lines into a sharp crease, 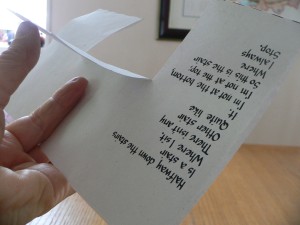 then push the box to the inside of the “card”. 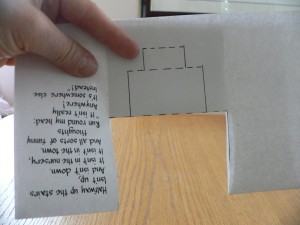 Repeat with the next set of boxes. Cut along the solid lines, crease the dotted line, then push it through to the inside of the “card”.

This is how it will look at this stage: 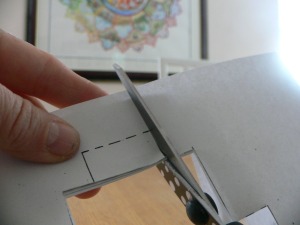 Now cut through the solid  lines of the next, the smallest, box. Make sharp creases, and push the “box” through to the other side.

Open up the paper, and carefully begin pushing the “boxes” through to the other side.

It may seem puzzling, but it works.

I hope you have fun with your arts and crafts day.