Frankfurt Mishneh Torah, Northern Itlay, dated to 1457.  Illuminated by the Master of the Barbo Missal

Justice, Justice, you will pursue. These are among the first words in this week’s Torah portion. The words echo in my ears, louder and louder.

We live in a western democracy. I live in Canada which has a democratically elected government. The United States to the south also has a democratically elected government. Here in Canada we are tolerant- at least we think we are. We strive to be more tolerant to others than ever before. Gay marriage has been legalized. Sex change operations are accepted. All modes of dress- from halter tops and shorts to burkas are seen on the streets. Acceptance and school accommodations for learning disabilities, autism, hyperactivity, physical disabilities and attention deficits are the norm not the exception. Employers cannot discriminate according to gender, race or religion. It all sounds good and right.

Those in favour of abortion, or in favour of Israel are shut down and excluded from public discourse. Those who are concerned about extreme Islam and doubt the direction of “Islamophobia” are called bigots and anti- Muslim. Those who want to use normative pronouns are pilloried and fired. This is not free speech. It is censored speech. Free speech is respectful speaking and listening without descending to hatred and threats. Free speech has too often morphed into aggressive speech and action. Unfortunately violent and hateful rallies are happening here, in Canada, and on university campuses. There is a problem with how the population defines free speech and democracy.

Two weeks ago there was a demonstration in Halifax calling for the removal of a monument honouring Edward Cornwallis. The Mik’maq people are among those calling for the removal of the statue. Although the Mi’kmaq are marginalized indigenous people who have lost land and rights in Canada, their leaders ensured that the rally was peaceful. They understand that the “fight ” for human rights and recognition does not have to be violent.

Currently too many activists from the far left and the far right resort to violence, hate messages and even murder. It’s frightening to read about the attacks in Barcelona, Spain; Turku, Finland; Halamish, Israel;   Charlottesville, USA; London, England; etc. etc. The behaviour of the Mi’kmaq is a model for discussion, understanding, and behaviour.

The balance of respect and dignity is part of justice. So when we read “Justice, Justice, you will pursue” let’s endeavour to bring that practice into our lives, our world,and the world around us.

With prayers for peace, acceptance and understanding,

Today, September 14, is my sister’s birthday. She decided that this year she would do at least one nice thing each day for two months. So, we made a “flutter book” with 60 pages and each day she wrote down that day’s good deed.

Her activities ranged from throwing away trash on the street to delivering food to the elderly through “Meals on Wheels”. Giving and gratitude are two sides of the same coin. My sister gave time and energy to others, and it made her feel good. One gives when one feels s/he has enough and can share. It doesn’t need to be something that costs money.  It can be a smile, a homemade item or hands-on help. If we are grateful for what we have we can share our gratitude with others.

We can read about respect and generosity in this week’s parsha, Ki Teitze.

The parsha addresses an extensive list of behaviours. The range of laws and guidelines is impressive. They deal with family and seemingly personal issues – the unloved wife, the rebellious child, a lost object… and treat those issues with the same gravity as crimes such as murder. The poor and weak members of society are also noticed in this parsha. I will point out a few of the situations that are discussed.

The treatment of one’s servants: one must pay one’s servant at the end of the day, “neither shall the sun go down upon it for he is poor, and sets his heart upon it.” (Deut. 24:15)  The lesson- pay your employees on time because they are depending on the money that is owed to him/her.  Safety standards: Houses in biblical times were built with flat roofs so people could sleep on the roofs. The Torah states that one must build a parapet (wall) around the roof so that no one will be in danger of falling of the roof while s/he is asleep. (Deut. 22:8)  Alternative to Food Banks: During the harvest the farmer must leave some of the produce for the “stranger, the fatherless and the widow”- i.e. for those in need. It directs the farmer to leave any forgotten sheaves in the fields, not to go back and get them. It describes beating the olive trees only once so that there will be olives left in the boughs. It says not to glean grapes  a second time after the first grapes have  been gathered. (Deut. 24: 19- 21)

This is an interesting parsha, one that should be read carefully in order to understand the details of how to treat those around you whether they are relatives, employees or strangers. The beautiful element of the message is that we always have something we can give or share with others. If we own a field we can share some of the produce. If we own something small we can lend it- or give it. At the least we can show and share respect for others.

Gratitude leads to generosity, and generosity leads to joy. Go ahead- have a good time and share your goodness with others.

Yours, with an accordion fold book, Laya

The parsha Devarim and its haftarah always precede the fast of Tisha B’Av  (the 9th of Av) when we read the Book of Lamentations or איכה .  Michael Mirsky- Torah reader and “leining” teacher extraordinaire-  explained to me why Devarim is always read before Tisha B’Av.  In the parsha Moses asks,”איכה אשא לבדי טרחכם ומשאכם וריבכם.” “How can I bear unaided the trouble of you, and the burden, and the bickering!” (Devarim 1: 12). As you can see, Moses’ plea  begins with the word איכה – Eicha.

This desolate haftarah is the last of the “Three Haftarot of Rebuke”. Isaiah recounts how God laments that His children – B’nei Yisrael – have rebelled against Him. They are corrupt, their prayers are empty and their sacrifices are meaningless.

Isaiah tells the nation their sins can become white as snow and the land can become fruitful and full again.  God asks Israel to “Learn to do well; Seek justice, relieve the oppressed, judge the fatherless, plead for the widow.” (Isaiah 1: 17) This relates to parallels a phrase in the parsha where Moses reminds b’nei Yisrael, “You shall not be partial in judgement: hear the small and the great alike.” (Devarim 1:18) Both quotations remind the Israelites to act fairly and care for those who are in need, no matter what station they hold in life.

In searching for an image for this haftarah I wanted something that expressed God’s desire that His children act well and justly.  The care of Jewish refugees in the nascent Israel of 1949 came to mind.

As we know, Jewish immigration to Israel, their ancestral homeland, was severely restricted by the White Paper of 1939. Jewish survivors of the Shoah (Holocaust) had to enter mandate Palestine illegally and if they were caught were sent to D.P.camps. When Israel was declared a state in 1948 there were suddenly thousands of Jewish immigrants in the country needing food, clothing and shelter.

The ma’abarot had problems and were not “perfect” solutions, but they were a genuine attempt to take care of the widows, the orphans and the needy when Israel was first established.

The illustration at the top of this post was inspired by a photograph of a ma’abarah in 1952.

B’nei Ysrael was promised the land of Israel, and we have the good fortune to be able to live there today. The direction to judge all people with the same fairness and righteousness, and to take care of all of those in need still stands today. We should be proud of what Israel and Jews internationally have achieved in terms of social justice and care of the sick and needy- but let’s remember to improve the world by being better ourselves.

Have a meaningful fast on the Tisha B’Av fast day. (This year the fast will be on Sunday, the 10th of Av because we aren’t allowed to fast on Shabbat). And let’s keep on making the world a better place!

P.S. There is a good website about the mabarot at http://jewishhistoryaustralia.net/podcasts/

It’s the Three Weeks – of War

This painting was created in response to the senseless killing of innocent Israeli soldiers on leave a few years ago. Called “Hesped” (Eulogy) it is King David’s eulogy over King Saul and Jonathan. Two psalms are written in the top corners. The writing was done in  23K gold leaf to represent the pain of loss, like fire on fire. Click on the painting to enlarge it.

This haftarah always precedes the fast of Tisha B’Av  (the 9th of Av). It is a desolate haftarah where Isaiah recounts how God laments that His children – B’nei Yisrael – have rebelled against Him. They are corrupt, their prayers are empty and their sacrifices are meaningless.

The haftarah is bleak, expressing Gd’s disappointment in His people and longing for them to improve. Gd and Isaiah are begging the children of Israel to improve their behaviour. Gd asks Israel to “Learn to do well; Seek justice, relieve the oppressed, judge the fatherless, plead for the widow.” (Isaiah 1: 17)

Right now we are nearing the end of the “Three Weeks” which is a period of mourning and reflection that occurs between the 17th of Tammuz and the 9th of Av.   It is a time of solemnity and is used to reflect on our behaviour. Can we perform a good deed and help another person? Can we cut back on- or even stop- our gossiping? What can we do to improve ourselves and the world around us?

It is a strange coincidence- or is it- that this year Israel is engaged in Operation Protective Edge. It is a defensive battle against the terrorist organization Hamas during these three weeks of mourning. Precious lives have been lost, but the battle must go on until the secret tunnels from Gaza to Israel are eradicated, the enemy weapons caches are destroyed, and the citizens of Israel can sleep at night without suffering continued rocket attacks from Gaza. 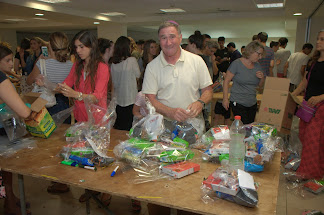 Beautifully, love and  energy and resources have been mobilized to send support, prayers, and good deeds to help win the war- not only by might but by faith and “mitzvoth”.

If you want to help you can donate to one of many organizations that are on the ground assisting those affected by the conflict. Magen David Adom, Leket, Yad Sarah, UJA, Soroka Hospital, Beit HaLochem Canada, One Family, are just a few. If you don’t want to send money, send prayers. It’s all good.

We hope to win the war with as little bloodshed as possible so we can live in our land in peace. May it be soon. Amen