“For he will be like a tree planted by the waters”

“A Tree Planted by the waters” by Laya Crust

Bechukotai is the last reading in the Book of Leviticus, a book devoted to teaching b’nei Yisrael how to conduct their lives. God sets out clear and detailed guidelines referring to acceptable morals and behaviour. There are directives on everything from marriage, to diet, to respecting the land. After all the rules have been laid we are told what will happen if we don’t follow the laws.

God says that if we follow His laws and observe His commandments “I will grant you rains in their season, so the earth shall yield its produce…I will grant peace in the land, and you shall lie down untroubled by anyone…” (26: 4, 26:6). It sounds so idyllic! The earth will be bountiful, noone will bother God’s people, and they will live in peace, harmony and comfort. But wait a minute…God continues with a warning…

“But if you do not obey Me and do not observe all these commandments, if you reject My laws and spurn My rules…I will wreak misery upon you…” (26: 14, 16) God’s warnings don’t stop there . They  become harsher and harsher. The text is frightening but finally the severity is mitigated. It is followed by God then telling His people that He will never forget them and will remember His covenant with them. God knows that the Israelites will return and will once again become strong and bountiful. The desolation is followed by hope. 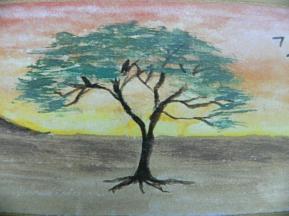 Tamarisk tree in the desert by Laya Crust

The haftarah follows the same theme. Jeremiah begins by telling the Israelites that their sins are written on their hearts and they will be punished.  But he also says, “Blessed is the man who trusts in the Lord, and whose trust the Lord is. For he will be like a tree planted by the waters, and spreads out its roots by the river, and he will not see when the heat comes. Its foliage will be lush and will not be anxious in the year of drought. And it will not cease from yielding fruit.” He says those who depend only on men will be like a tree that grows on parched land in the wilderness. But one who trusts in God will be like a tree planted by the waters which spreads its roots by the river.  The tree will flourish even during a drought.

The message of desolation turning to hope exemplifies the Jewish people. It also delivers a  personal and comforting message.

We as individuals have choices throughout our lives. We can follow a path of good, of mediocrity or of evil. We can take our strengths and gifts and use them to improve our surroundings, we can ignore those gifts, or we can use them selfishly. There are people we meet throughout our lives who use their talents and make visible improvements to the world around them. One such man was Dr. Eli Cohen z”l.

Dr. Cohen was born in Baghdad, Iraq in 1938 where his family had lived since about 500 BCE. In 1951, when it became dangerous for the Jews living in Iraq, his family emigrated to Israel. They had to relinquish their Iraqi citizenship, and all their assets were either frozen or taken by the state. He never forgot his country, the house where they lived, or the open hospitality of his mother. When he was 18 he joined the Israeli Defense Forces as a paratrooper commando. He earned a bachelor’s degree from Hebrew University then left Israel to further pursue his education in Manitoba, Canada. Ultimately Eli earned four degrees, in genetics and then statistics.  One of the technologies he developed is a medical instrument that monitors whole blood coagulation mainly during surgery (TEG). The TEG is used in hospitaals internationally and has saved thousands and thousands of lives and improved surgical outcomes.

Eli and his wife Carole developed the company Haemoscope together. Together they raised three phenomenal children, mentored countless students and employees, and created a caring workplace. They invested in and cared about their employees and never lost sight of the people whose lives would be saved through the technology.

As it says in Jeremiah 17:8,  “For he will be like a tree planted by the waters, and spreads out its roots by the river, …And it will not cease from yielding fruit.”  Dr. Eli Cohen z”l has left a legacy of beauty, generosity, vision and kindness. He improved the world through his family and research, and they will continue to improve the world for generations.

With thanks to Carole Cohen and Dr. Eli Cohen z”l, may we all strive to be like a tree planted by the waters. not afraid of the heat and spreading out our roots to be strong and give sustenance to those who need it.

May you have a foliage full, and fruitful week, and a Shabbat shaded by those you love.