We are reading the first stories in the Book of Genesis, ספר בראשית.  After creating the world and creating humankind with the gift of free will, God saw that free will wasn’t a trait that always would be used for good purposes. Rather than using their choices for beauty and good, some of humanity showed themselves to be envious, greedy, violent,  and, well murderous. God found a man, Abraham, who had integrity and searched for truth. Together Abraham and his wife Sarah were chosen to begin a new nation, God’s chosen people the Jews.

In the Torah readings of “Lech Lecha” and VaYeira” we read some of the challenges that God put before Abraham. One of those tests was “Akeidat Yitzchak” the binding and threatened sacrifice of Abraham and Sarah’s precious son Isaac. There were personal repercussions, but Abraham retained his faith in God and his descendants are the Jewish people of today.

Bill Glied wrote the following poem which he read when he led groups to the concentration camp of Majdanek: 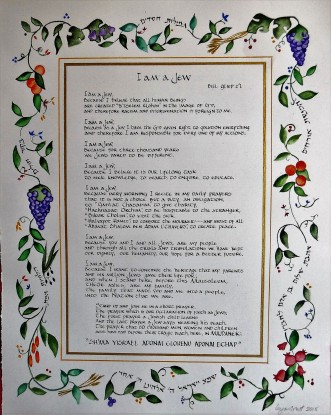 Bill Glied z”l was a wonderful man of faith. He was born  in 1930 in the town of Subotica, Serbia. In April of 1944 Hungarian gendarmes rounded up more than 400,000 Jews. Bill Glied and his family were among those Jews and were transported in cattle cars to Aushcwitz. His mother and 8 year old sister were killed immediately. He and his father were sent to a camp in Bavaria where they worked for 12 hours a day to build an underground airplane factory. Bill survived the camps and the war but tragically his father died of typhoid fever eight days before U.S. troops liberated the camp in 1945.

Bill was not a bitter man and devoted a great deal of time to teaching youth about the Holocaust, and making sure that the tragedy will not be forgotten.

He wrote a beautiful poem, “I AM A JEW” as a wake-up call and an inspiration to others.”I AM A JEW” is a lesson, a guideline, for what we, as Jews, are. It describes the best that we can strive for. It outlines the traits we should cultivate and can achieve.

I was honoured to be asked to write out the poem,  With the family’s permission I am reprinting it and showing the illustrated poem.

Bill Glied came to Canada in 1947,  and married Marika Nyiri in 1959. They had three daughters, Sherry, Tammy, and Michelle, eight grandchildren, and a great grandchild. His family carries on Bill’s love of the world and let’s all ensure that his name will be remembered as a blessing.

Have a Shabbat Shalom,   Laya 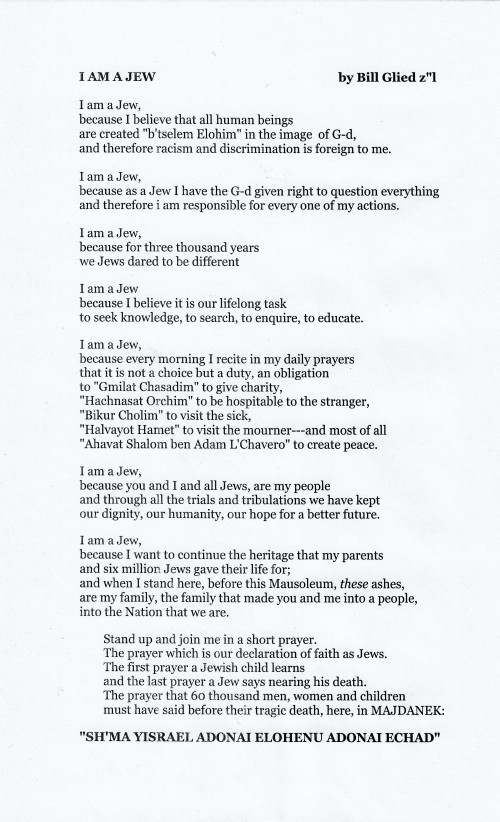 This is a very difficult time in many parts of the world, but the horrors in Israel touch me very closely. I am an ardent Zionist and a Jew. I have children and grandchildren who live in Israel, including in Jerusalem. I have many friends and relatives there. I just came back from that miraculous country but while I was there 4 people were viciously murdered by Palestinian terrorists. Since then more murders have occurred. My first thoughts in the morning and my last thoughts at night are of Eitam and Na’ama Henkin z”l (may they be remembered as a blessing) who were murdered only because they were Jewish and lived in Israel. That’s the only reason! I think of their 4 children who will grow up without their wonderful parents. And I can’t understand it. 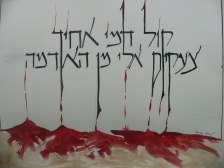 Last week in synagogue we read the story of the creation of the world and humanity. We also read about the first murder. Cain, jealous of Abel, killed him. God said, “The voice of your brother’s blood cries out to Me from the ground….the ground which opened its mouth to receive your brother’s blood from your hand… “

“The voice of your brother’s blood…” Such powerful words.

There is an interesting animated movie going on in the Middle East. Syria, Iraq, Islamic State,Afghanistan, Lebanon, Sudan and Yemen are like balls of flame, burning in war and hatred. Saudi Arabia, Iran, Egypt and Iraq are brimming with unrest and dictatorship. And in the middle of it all Israel, a jewel of green land and democracy, stands on its own against the surrounding chaos, refusing to get sucked in.

Yet, there are these terrible, tragic losses of life.

This week we read the story of Noah in the Bible. Sick of humanity’s cruelty God destroyed the world by flooding it. The rainbow we see after a rainfall is the symbol of God’s oath that the world will never be entirely destroyed again.

Many of us sit in our chairs praying for peace in Israel and the rest of the world. We can’t understand God’s allowing the violence to continue or the terrorism raging in Israel’s streets or the loss of the young, exceptional parents of 6 children. We can only do what Israelis are doing in Israel- live good lives, do acts of kindness, and don’t allow hatred to rule our minds and actions.

With prayers for peace, health and beauty,