Joseph and His Threads

We read the story of Joseph every year. It’s quite a tale. There is jealousy, subversion, lust, deception, desperation and at the end there is reconciliation.  It’s a good adventure and provides inspiration for musicals and bedtime stories.

In reading and rereading it I was struck by how often clothing is mentioned. We all think of the special coat Jacob gives Joseph, the act that seems to be the catalyst for subsequent events. Throughout the saga of Joseph and his family events are punctuated by references to clothing. Sometimes the reference is to a garment being torn in mourning. 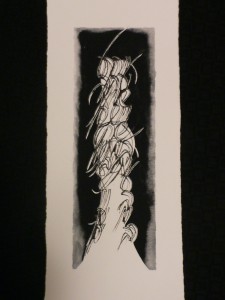 Often the change in an outfit announces the change in a scene or situation, as when Joseph is taken out of jail and given a set of clean clothing to wear before seeing Pharaoh.

Why was there this focus on clothing?

Clothing has been mentioned in previous Torah texts. Often – not always- it is related to deception or humiliation and shame.  In the story of Adam and Eve clothing doesn’t appear until Adam and Eve have sinned and they put on fig leaves to cover themselves and hide from G-d. Noah, while drunk, is uncovered and thereby humiliated.  In the story of Jacob and Esau, Jacob dons animal skins and Esau’s clothing in order to fool his father Isaac.  Later Leah wears a veil at her wedding  to trick Jacob into believing he’s marrying Rachel.  In the next generation Joseph’s brothers grab his coat and dip it in blood to fool Jacob into thinking Joseph has died.  Tamar deceives Yehudah by wearing the garb of a harlot and  Potiphar’s wife grabs Joseph’s cloak and keeps it, fabricating (pun intended) a story,  accusing Joseph of trying to molest her. The biggest masquerade of all is that of Joseph. Wearing Pharaoh’s ring,  garments of fine linen and a gold chain, he entertains his brothers while hiding his true identity

The story of Joseph is a saga, a twisting tale of favouritism and sibling rivalry. Joseph began his life as the chosen son and was given an exceptional coat.  He wore his fabulous coat, announcing to his brothers how wonderful he thought he was. Think of it- he wore his regal cloak- the mark of his father’s favouritism- to the fields where the brothers were working hard in the sun and he was visiting, not working. He was sold into slavery because of his arrogance. Being sold into slavery and transported to a foreign land Joseph faced huge challenges.  He used his faith, intelligence and wits, rising to the highest position available in the country. Clothing and appearance continued to be elements in the saga. Sometimes they hindered Joseph and other times benefited him.

This story sets the scene for the next chapter of the history of B’nei Yisrael where the favoured descendants of Joseph become slaves. It’s a fascinating study. I thought about how the words wove a complicated and layered story.  The repeated reference to clothing mirrored the layering of the narrative. I looked at the words as the threads of the story line.  I wove those phrases dealing with nakedness, dress, and clothing  and created 18 images for the Joseph story line.

It seems that much of Bereshit deals with deception and appearance. Faith in one G-d is the main message of Bereshit, but deception is another.  In Joseph’s family- in the entire Jacob family chronicle – people tampered with appearance. Instead of speaking honestly to each other they often tried to get what they wanted by masquerading.

We live in a world where we are judged not only how we behave but also by what we wear. Clothing in our daily lives announce who we are and how we want to be seen.  We live in a time and a society that is very tolerant of individuality (piercings, tattoos, dreadlocks, shaven heads, hemlines of all lengths, necklines of all depths). But we are  still judged by our appearance. We can use our appearances and garb to get ahead,  and to achieve our goals. We may be masquerading but the truth catches up with us. At the end of the day the world turns and things probably work out as they should. But- it’s probably more comfortable to wear the clothes that are real rather than dress up as someone else.