This week’s parsha, VaYeitze, tells the story of Jacob’s time in Padan Aram from start to finish. He left his family in Be’er Sheva to escape his bother’s wrath and seek a wife among his mother’s family. When he decided to return home he had two wives, two concubines, twelve sons and one daughter plus cattle and wealth.

When Jacob arrived in Padan Aram he saw his cousin Rachel at a well and fell in love with her. He promised to work for seven years for her hand in marriage. He was tricked by his Uncle Lavan and the morning after the wedding he discovered he had married Leah, the older sister. So Jacob worked an additional seven years in order to marry his beloved Rachel.

In this story we see the foundation of certain elements of the traditional Jewish marriage ceremony. Before the wedding ceremony under the chuppah we have the “Bedecken” when the groom sees the bride’s face before lowering her veil. This is to ensure the groom marries his chosen bride, and avoids the trick played on Jacob. As in ancient times there is an exchange of goods between the two families. The bride brings a dowry and the groom gives something of value to the bride’s family. In Isaac’s case his proxy, Eliezer, gave precious silver and gold and “raiment” to Rebecca’s family. In Jacob’s case he didn’t have valuables so he pledged to work for seven years for each of his brides.

Over 2,000 years ago Jews began to use a written marriage contract. The ketubah, meaning “writ” in Hebrew, records the date and place of the wedding, the names of the bride and groom, and the financial obligations of each family. This legal document was the first legal document in history designed to ensure financial stability for a married woman.

Throughout time couples started to get decorated ketubahs. Now it is very popular for a couple to commission an original, hand written and painted ketubah, or to buy a poster-type ketubah on line.

I’ve been making ketubahs for decades and have designed and painted over 600 of them! The ketubah in still written in the ancient language of Aramaic and still mentions dowry and the husband’s responsibilities towards his wife and her well being.  Some traditions use actual dollar values and some ceremonially use ancient currencies.

Leah and Rachel, Jacob’s wives, didn’t have a ketubah. They were fortunate to be married to a man who took care of them and their children, honoured his obligations to his father-in-law, and was able to feed and shelter his large family. It’s true- there were jealousies and difficulties, but Jacob did take care of his own.

I love making ketubahs- discovering a couple’s dreams and preferences. If you want to see more examples of my ketubahs, maybe even order one or commission your own, take a look at my website: www.layacrust.com.

Make sure to read this week’s Torah portion and enjoy. It’s the beginning of a world altering family saga! Have a Shabbat Shalom,

This year the month of Adar began on the evening of February 9, 2016. And, we don’t have one Adar, but 2 months of Adar. Yes- it’s a Jewish leap year, a year when we add another month so that our lunar calendar lines up, more or less, with the solar calendar. It’s an interesting topic and you can read about it at  Months of the Jewish Year – My Jewish Learning  or for a more mind boggling explanation you can go to Leap years , an article from wikipedia.

Terumah might just be a perfect reading for the beginning of Adar. The parsha deals with the instructions Gd gives for building a holy sanctuary. The haftarah parallels this with a description of the work King Solomon instituted for building the Beit haMikdash, the Temple in Jerusalem.

At the beginning of the parsha Gd says, “Tell the Israelite people to bring Me contributions; you shall accept contributions for Me from every person whose heart so moves him.”  (25:2) The gifts Gd is referring to are precious building materials for the sanctuary .

The wording is precise, “אשר ידבנו ולבּו”.  “Those with a willing heart” are invited to contribute to the building of this important sanctuary.  The building materials are given with generosity and joy. Resentment won’t taint the sanctuary of prayer and guidance. The idea of giving with generosity and joy rather than giving through coercion or compulsion (like many taxes and levies) fits nicely with the joy of Adar.

Adar is called the month of joy, and so having 2 Adars means we get to celebrate 60 days of joy. What could be better? My friend Esther Gur gave a talk in which she discussed the meaning of “simcha” (joy or happiness) in the month of Adar. My interpretation of what she said is that joy or happiness is not the simplicity of laughing at jokes. It’s not the fleeting pleasure of drinking a good glass of wine; or buying a new book, piece of clothing or electronic device.  “Simcha” is related to fulfillment. When we create something beautiful or do something good- doing it from a place of generosity not from a feeling of duty- we feel “simcha” or heartfelt joy.

In these two months of Adar I hope you give yourself the opportunity to do things you really love and give you great satisfaction. Enjoy and HAPPY ADAR!

Have a Shabbat Shalom

P.S. The painting at the top is based on a ketubah from 1853 Istanbul, Turkey. It shows boats floating on the Bosphorous River. I f you want to enlarge the image at the top or the ketubah below you can click on them. 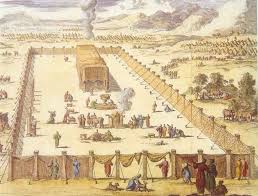 This week we are reading parshat Nitzavim, and the haftarah is from Isaiah 61:10- 63:9. It is the seventh Haftarah of consolation after Tisha B’Av and is read on the Shabbat preceding Rosh HaShana. King Cyrus has defeated Babylonia and the possibility of returning to Israel is ever closer.

As in other haftaroth that we have read recently God is presented as a bridegroom and the nation of Israel as a bride. There are two lines in this haftarah that are often sung at weddings- (excuse the transliteration) “um sis chatan al kallah, yasis alayich elokayich “. “And as a bridegroom rejoices over his bride so will your God rejoice over you”  Isaiah ch. 62: 5.

August is a beautiful month to get married. The trees are green, the flowers are bright and colourful, and we are enjoying the last relaxing weeks of summer. Two weeks ago a lovely young couple- Tova and Cliel Schachter- got married. Surrounded by family and friends they formalized their commitment to each other, embarking on a new path together.

Tova and Cliel wanted a special ketubah that would represent their values, outline their dedication to each other and reinforce their commitment to mutual respect and equality. Together we discussed the steps they had taken throughout their lives to reach this point and the ideals they share.

Their love of family, friends and Judaism are paramount in their lives. They have a desire to better the world. Their creativity and joy in all they approach is obvious. So- how to put this into a ketubah design?

It occurred to me that they had mentioned that the events of their lives were steps they had taken to arrive at this point in time. And  nothing is more important to Tova and Cliel than family. The idea of a staircase rising within a bower created by two trees seemed perfect. They used a traditional Aramaic ketubah under the chuppah and also signed a Brit Ahuvim which discusses love, respect and mutual responsibility.  The Brit Ahuvim is the text shown here.

The two family trees are growing together, sheltering and guiding a staircase that will reach to the future- to heights beyond imagination.The papercut leaves are the relatives and friends and children of the future. In the sky are 18  23 karat gold stars- a life of precious beauty.

I put it all together, writing the Brit Ahuvim on the staircase, cutting the trees and leaves in a papercut design, adding the 18 stars and then combining all the elements.

It was a perfect day for the young couple, and in terms of our Jewish calendar it is a perfect time too.

Mazal Tov to Tova and Cliel, and Shabbat Shalom to you!