Over the last couple of months I have been perusing my haggadah collection and books about haggadot. It is fascinating to note the changes in illustration influenced by culture, politics, and artistic trends.

In medieval times a short section was added to the haggadah after the meal was finished. It begins with the Hebrew words “Shafoch Hamatcha”- a phrase  calling on Gd to pour His wrath on those people who do not know Him.  At a traditional seder the people attending stand up while the door is opened so Elijah (Eliahu) can enter and take a sip from his special cup of wine in the centre of the table. We children all used to watch the cup of wine very carefully to see how much

disappeared- did Eliahu really come? As my father explained he could only drink a tiny, tiny bit because he had to visit EVERY Jewish house in the world that was hosting a seder.

But I digress. This text was added in the 11th Century after  the Crusades began.In early haggadot the first word of the phrase was decorated but it wasn’t until a couple of centuries later a special illustration was added.

In Prague, 1526 someone decided to illustrate it. A figure of the messiah is shown riding a donkey- a reference to salvation. This woodcut was quite small. it was just a small insert into a much larger page.

The woodcut was copied and reprinted into a number of different haggadah editions. In 1560 an artist in Mantua decided to  embellish the image. Not only do we have  whole landscape with Eliahu accompanying the Messiah, the whole layout is changed. The two figures and the landscape cover almost half the page. The title word is also very large and ornate. Just above the building (is that Jerusalem?) we see a tiny soldier in full uniform. He may be representing the enemy that does not acknowledge Gd.

This page is from the Washington haggadah, created in Northern Italy in 1478. Yoel ben Shimon was a prolific artist and scribe who created at least 8 haggadot in Italy and Germany.  His painting is delightful. It’s such a surprise to see the Messiah galloping through a town with a family riding behind him, holding on for dear life. They all seem to be wearing period dress with the father/ husband in a cloak and hood. The wife is wearing a lovely gown and hat and carrying a cup of wine As they pass a house a gentleman is in the doorway holding out a cup of wine- maybe for Eliahu. 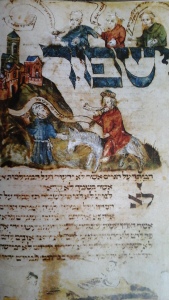 The illustration on the right  is from a 15th century German haggadah. It is a sweet rendering. The man leading the horse may be Eliahu. The rider is wearing a crown, a regal red robe and he is the person blowing the shofar.The ribbons coming from the figures all have biblical verses referring to redemption and the coming of the Messiah.

I used the woodcut from Mantua, 1560 as the model for my Shabbat HaGadol painting. The haftarah reading is from Malachi 3:4 – 24. Verse 23 is read twice. It says, “Behold I will send you Elijah the prophet before the coming of the great and terrible day of the Lord.” The reference to Elijah and the approach of Pesach made this a great “match”.

By the way- the Worms, Germany Haggadah of 1521, changed the reading somewhat. They substituted the original phrase with:

“Pour out Your love on the nations who have known You,
and on the kingdoms that call upon Your name.
For they have shown loving-kindness to the seed of Jacob,

This year take a look at the illustrations in your haggadah. They can be a lot of fun.