This Shabbat is called Shabbat Zachor- the Shabbat of Remembrance. In preparation for Purim, which falls next week, we have an additional Torah reading about the evil King Amalek. He is identified as the ancestor of Haman, the villain in the Purim story.  Amalek  instructed his army to attack the  Children of Israel, specifically the defenseless and the weak as they walked through the desert after leaving Egypt.

This Shabbat’s haftarah recounts a poignant story about King Saul and his dealings with Amalek. The prophet Samuel tells Saul that he is to remember what Amalek did to B’nei Yisrael  (the children of Israel). Saul is to go and destroy ALL the Amalekites, the young and the old, and all their possessions. King Saul gathers his warriors and they go to do what has been commanded of them.

Saul and his warriors flatten the towns, and kill the inhabitants and their cattle- but he spares Agag the Amalekite king and keeps the choicest animals to offer as sacrifices to God. When God sees what has happened He instructs Samuel to reprove Saul and take away the kingship from him.

The text is beautifully written. With short, strong phrases the human mistakes Saul makes are recounted and the heavy directive to Samuel is described. Saul, a man with a good heart, carries out most of what God told him to do. But as Samuel reminds him, “Though you are little in your own sight were you not made head of the tribes of Israel? And the Lord anointed you King?…” The spirit of God is taken away from Saul and Samuel turns his back on the broken king. As Samuel walks away Saul falls to the ground and grabs Samuel’s cloak. The cloak rips in his hand, and Samuel tells Saul, “The Lord has ripped the kingdom of Israel from you this day and given it to a neighbour of yours that is better than you…”

It is a heartbreaking story of a fallen King. The most tragic element is that Saul had never wanted to be king. He wanted to live a simple life but monarchy was thrust upon him. He wasn’t a natural leader, he was a follower. In this situation he followed the desires of his nation rather than the commandment of God. 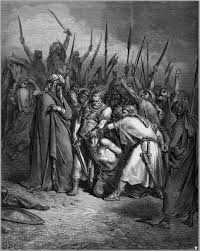 The evil of Amalek is presented in the additional reading and in the haftarah. The readings are  precursors to the story of Purim, the Jews rising against Haman- a descendant of Amalek. As we read we are reminded that in every generation there rises an enemy, and we have to have faith in God and listen to God’s teachings.

Read the story. It’s  another exciting and emotional incident in our canon. And remember it’s OUR story. Shabbat Shalom.