My thoughts this week have been circling around all the painful news coming out of Minneapolis and Hong Kong. And of course the overwhelming health issues faced by the entire world. I tried to see what we might learn from this week’s Torah and haftarah portions.

This week’s haftarah is the story of an angel telling a woman and her husband that they will become parents. The wife is to raise her child as a Nazir- a holy individual who cannot cut his hair or partake of food or drink from grapes. The two farmers listen to the messenger’s instructions. The woman herself follows the rules of a Nazir, and they raise their son as directed. The fact that the baby will be a Nazir is the connection to this week’s parashah.

The parashah discusses the certain rules surrounding the purity of the Israelite camp while traveling through the desert:

As well as protecting the sanctity of the camp we see a measure of equality established. The leader of each of the twelve tribes brought forth a specified series of offerings to the Tabernacle. All leaders brought the same offerings, and each was assigned a different day to perform the ceremony. In that way, each tribe was given the same honour and recognition as the other tribes.

Aaron gave this blessing to all the Israelites. It was a prayer to give children of Israel a sense of love and security. The nation was given rules in the form of the Ten Commandments to create a society of equality, fairness, integrity, and respect. Cohanim bless their congregations with this prayer to this day. Parents say this blessing over their children on Friday nights.

I have been thinking about the terrible murder of George Floyd. Some people have reacted violently by destroying property, looting stores, and injuring others.

What can we learn from this week’s readings? We must treat others with respect and equality, no matter what their station in life. We can only surmount the difficulties through cooperation, wisdom, and respect. If we carry Aaron’s prayer in our hearts we may feel less alone. If we act with integrity, respect, and love we will be able to pass it on to those around us and help to heal this fractured world.

With hopes for love and respect, have a Shabbat Shalom. Laya 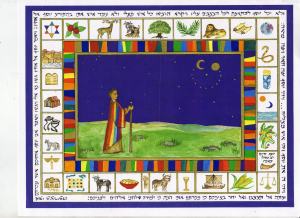 The colourful story of Joseph and his brothers reaches its climax in this week’s parsha, VaYigash.  The brothers and their father, Jacob, had survived the famine in the land of Canaan but could not survive much longer. For the second time the brothers  traveled to Egypt to get food.  They went with troubled hearts. They had been warned not to come unless they brought their youngest brother, Benjamin. Their fears of something bad happening to Benjamin were realized when Benjamin was “framed” by Joseph’s attendants.

The beauty/ pathos of the story unfolds from here.  Judah stepped forward (VaYigash) and begged for understanding. He poured out his heart, recounting the family history to this great Egyptian before him. Judah hoped that by telling this leader of his father’s frailty the leader may accept Judah as a slave rather than take his youngest brother.

Joseph could carry on the charade no longer. He cleared all the Egyptian attendants from the room. It says, ” And no man stood with him while Yosef made himself known to his brothers. And his voice cried out with weeping, and Egypt heard, and the house of Pharaoh heard.”

Joseph forgave his brothers and the family was reunited. Yaakov/ Israel saw his beloved son and his mourning was alleviated. The brothers and their families traveled to Egypt and settled in Goshen where they lived comfortable lives. This message of reconciliation is echoed in the haftarah.

The haftarah’s message is unity as expressed on two branches.  One branch represented the nation of Judah and the other represented  Joseph’s lineage. Ezekiel wrote the following phrases onto the branches: “For Judah and for the children of Israel his companions” on one, and “For Joseph, the stick of Ephraim, and of all the house of Israel his companions” on the other. The background of my painting is made up of significant phrase from Ezekiel’s speech. You can click on the image to enlarge it.

Ezekiel then held the two branches up in front of a gathering of the exiled Jews. He showed that the two groups could be reunited and grow together as one unified nation.

It is interesting how many ways Jews can be looked at in order to create divisions- countries of origin  (Moroccan? German? Swiss? Canadian?) or  Sepharadi vs Ashkenazi or orthodox/ conservative/ reform/ resconstructionist/ humanist or  black kippah vs crocheted kippah vs kippah on an angle or politically right vs politically left.

Just as in the story of Vayigash and in Ezekiel’s pronouncement, we are all B’nei Yisrael- Jews. We can be united and in that way be true to ourselves and stronger as a nation. The haftarah says, “Behold I will take the children of Israel from among the nations…and bring them to their own land.” (v.21). We see it happening today. Jews from all over the world are coming to Israel. But- you don’t have to be Jewish! Come to Israel! Visit! It’s beautiful there.

May we be one people working for peace and improvement of the world.