Ezekiel- A prophet among the Israelites exiled to Babylon. He prophesied there from about 592 – 572 BCE.

Ezekiel the prophet recounts that he was lifted up by God and placed in the middle of a valley full of bones. Ezekiel and the Lord have a conversation in which God tells Ezekiel to prophesy over the bones and then God will fill them with the breath of life. That is indeed what happens. Ezekiel prophesies and he hears noise and rattling. The bones come together and become covered with sinew and flesh. Then breath comes from the four winds and the bodies rise up and live . God tells these resuscitated people that  He will put His spirit in them and they will live in their own land. The bones represent “the house of Israel” and when they are ready God will bring them back to Israel.  He says, “And I will put my spirit in you, and you shall live.”

The painting at the top of the page (if you click on it , it will enlarge) is based on a fresco painting from the Dura Europas Synagogue. It shows Ezekiel at the Valley of the Dry Bones, in time lapse illustration (is time lapse a new or an ancient concept?) being carried by the hand of God. The Eastern looking Ezekiel with flowing curly hair is wearing embroidered crimson robes and deep green trousers. All the hands, faces, and bones shown in the painting really illustrate the scene presented to Ezekiel the prophet. 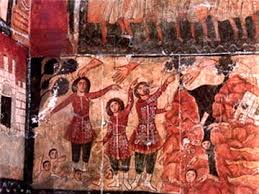 The painting is one of many found in Dura Europas, Syria. It was a small trading city in eastern Syria near the Euphrates River. The ancient synagogue was completed around 244 BCE, and its walls were covered by incredible frescoes or tempera paintings that illustrated stories from the Torah, the Prophets, and other books of the bible. The paintings were discovered during archaeological excavations in 1932. 58 paintings were found, and it is believed that originally about 100 Biblical scenes were painted on the walls. 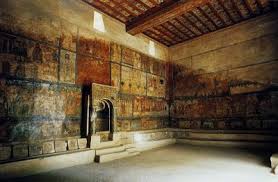 The frescoes are wonderful.  It’s always fascinating to see the depictions of biblical figures wearing clothing and using objects specific to an ancient time we aren’t familiar with.

This particular story is appropriate for a Passover reading. In the story of the Exodus the children of Israel walk through the desert and God takes them to their own land- the Land of Israel. In Ezekiel chapter 37 God tells the people whom He has revived that He will take them to the Land of Israel.

It makes one think of other such parallel stories from throughout our difficult Jewish history.

And have a Happy Pesach.

And have a Happy Pesach.ers.