VaYechi- And He Lived

VaYechi is the last Torah reading in the Book of Beresheit (the Book of Genesis). It is just that- the story of the beginning, or genesis, of the world and of a people. The parsha begins with a word that in biblical Hebrew means “and he lived”, and in modern Hebrew means “and he will live”. It is appropriate because this word refers to Jacob who died in this parsha but created the family legacy which would continue, living as the Jewish nation.

Our forefathers and foremothers did not have perfect family lives. There was jealousy, jostling for power and attention, and lifelong resentments. We read about favouritism. There was very little tenderness exhibited in the harsh lives they led. However, tenderness does appear in this parsha.

When Jacob was 137 years old he had been living in Egypt with Joseph and his other 11 sons for 17 years. He knew he was about to die and called Joseph and Joseph’s sons to his bedside. “…he kissed them and embraced them. And Yisrael said to Joseph,’ I had not thought to see your face: and lo, God has also shown me your children.’ ” (Genesis ch 47 v..11) Yaakov was expressing the longing he had felt for decades, never believing he would see his son Joseph again. Neither Abraham nor Isaac had ever spoken to their children with such honesty and warmth.

We go on to read the first ethical will ever recorded. Jacob spoke to each of his sons, and to his two favourite grandsons. He foresaw how they were going to navigate the world. The prescience could have been see by the sons either as warnings or as guidelines for how to lead their lives in the best way possible. As well as speaking about the children’s’ attributes Jacob also made it clear that when he died he was to be buried in Canaan in the same place his wife Leah, his parents Isaac and Rebecca, and his grandparents Abraham and Sarah had been buried.

This scene and this request- he actually insisted that it be an oath- were the greatest lessons of all. By gathering the sons together in one room and speaking to each of them one by one Jacob was cementing the family unit. It wasn’t a speech to all the servants and to those Egyptians who respected him, it was a speech only to his sons. This showed them how he valued them as a family unit with common roots, and that they would retain their nationhood and integrity if they stayed together.

As always there are many lessons in the parsha. Communication in family, showing love to our children, expressing our deepest wishes, seeing each child as an individual, the power of the ethical will, unity, and being in the right place are all lessons from this reading.

We live in a frightening world with too much hatred and too much violence. If we stand together as a unified nation, if we live with the integrity laid out in halachah (Jewish precepts and law), and if we know who we re as Jews and where we belong, maybe we can help heal our nation and heal the world more effectively. As we go forward we might also be able to learn from Yaakov Avinu (our father Jacob’s) ethical will to us, his descendants.

With blessings for goodness and peace, Shabbat Shalom. 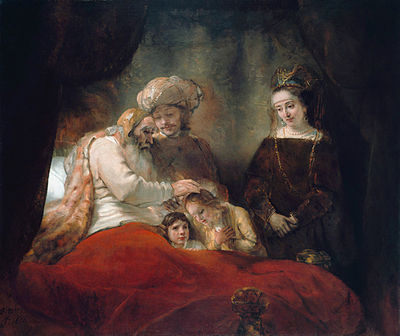 Jacob Blessing the Sons of Joseph,  by Rembrandt, 1656

The Torah reading, Va’Yechi, describes the last days of Jacob’s life. He led a complicated life. He  balanced the challenges of marriage and supporting a large family with his God given role as the third patriarch of a new people. He used strategy and manipulation to reach his dreams and accomplish his goals.

The word Va’Yechi  means “and he lived”,  emphasizing that Jacob had really lived and learned, that he had not merely coasted along in life and survived. In a way his life began when he had to run away from his brother Esau. At the end of his life we see how experience taught him deep wisdom and the clarity to understand people.

Jacob was raised in a family where his father, Isaac, loved the older brother Esau, and Rebecca, the mother, favoured Jacob, the younger brother. Although the two boys were twins Esau (the elder by only minutes) was expected to be bequeathed the greater inheritance and family rights. The parents’ preferential treatment towards different children and Jacob’s desire for some of his brother’s rights led to mistrust and maybe even hatred. The family splintered because of it.

Jacob repeated the preference of the younger over the older throughout his life. He chose  to marry Rachel, the younger of two unmarried sisters, countering common practice. Jacob presented Joseph, his favoured son, not Reuben the first born, with a regal tunic.

Jacob and Joseph, by Laya Crust

The choices led to a fractious relationship with his brother Esau, a bitter life with competitive wives, and the disappearance and supposed death of his favourite son. The family challenges coupled with a famine must have mellowed Jacob and increased his empathy and understanding of others.

Jacob learned and stood by an important lesson. Do not judge people by birth order or by wealth. I suspect he learned his respect for wisdom and leadership over birth order and wealth from his parents. His mother left a manipulative brother to live a new life. His father was a second son who inherited the role to establish a new nation. Jacob, like his father, recognized that he, not his older brother, was to be the leader of the Jewish people. Although it may have been contrary to the norms he and his mother devised a plan to make sure the most appropriate son received the appropriate blessing.

Jacob  raised Joseph differently from his brothers, possibly recognizing that Joseph needed a different education to fulfill his potential. In a stark replay of history he blessed his grandsons, Menashe and Ephraim, in the “wrong” order- the younger before the older.

At the end of his life he spoke to each of his sons, and seeing each for who they were. He recognized various sons as strong leaders, successful politician, merchant, trader,  warrior, baker, and farmer. The text says,”…and this is that which their father spoke to them, and blessed them; every one according to his blessing he blessed them.” (Genesis 49: 28)

May this be a year of peace, honesty, and goodness. I hope everyone will have the wisdom of Jacob to see what is good, what is evil, and to fight the right battles.

Joseph and His Threads

We read the story of Joseph every year. It’s quite a tale. There is jealousy, subversion, lust, deception, desperation and at the end there is reconciliation.  It’s a good adventure and provides inspiration for musicals and bedtime stories.

In reading and rereading it I was struck by how often clothing is mentioned. We all think of the special coat Jacob gives Joseph, the act that seems to be the catalyst for subsequent events. Throughout the saga of Joseph and his family events are punctuated by references to clothing. Sometimes the reference is to a garment being torn in mourning.

Often the change in an outfit announces the change in a scene or situation, as when Joseph is taken out of jail and given a set of clean clothing to wear before seeing Pharaoh.

Why was there this focus on clothing?

Clothing has been mentioned in previous Torah texts. Often – not always- it is related to deception or humiliation and shame.  In the story of Adam and Eve clothing doesn’t appear until Adam and Eve have sinned and they put on fig leaves to cover themselves and hide from G-d. Noah, while drunk, is uncovered and thereby humiliated.  In the story of Jacob and Esau, Jacob dons animal skins and Esau’s clothing in order to fool his father Isaac.  Later Leah wears a veil at her wedding  to trick Jacob into believing he’s marrying Rachel.  In the next generation Joseph’s brothers grab his coat and dip it in blood to fool Jacob into thinking Joseph has died.  Tamar deceives Yehudah by wearing the garb of a harlot and  Potiphar’s wife grabs Joseph’s cloak and keeps it, fabricating (pun intended) a story,  accusing Joseph of trying to molest her. The biggest masquerade of all is that of Joseph. Wearing Pharaoh’s ring,  garments of fine linen and a gold chain, he entertains his brothers while hiding his true identity

The story of Joseph is a saga, a twisting tale of favouritism and sibling rivalry. Joseph began his life as the chosen son and was given an exceptional coat.  He wore his fabulous coat, announcing to his brothers how wonderful he thought he was. Think of it- he wore his regal cloak- the mark of his father’s favouritism- to the fields where the brothers were working hard in the sun and he was visiting, not working. He was sold into slavery because of his arrogance. Being sold into slavery and transported to a foreign land Joseph faced huge challenges.  He used his faith, intelligence and wits, rising to the highest position available in the country. Clothing and appearance continued to be elements in the saga. Sometimes they hindered Joseph and other times benefited him.

This story sets the scene for the next chapter of the history of B’nei Yisrael where the favoured descendants of Joseph become slaves. It’s a fascinating study. I thought about how the words wove a complicated and layered story.  The repeated reference to clothing mirrored the layering of the narrative. I looked at the words as the threads of the story line.  I wove those phrases dealing with nakedness, dress, and clothing  and created 18 images for the Joseph story line.

It seems that much of Bereshit deals with deception and appearance. Faith in one G-d is the main message of Bereshit, but deception is another.  In Joseph’s family- in the entire Jacob family chronicle – people tampered with appearance. Instead of speaking honestly to each other they often tried to get what they wanted by masquerading.

We live in a world where we are judged not only how we behave but also by what we wear. Clothing in our daily lives announce who we are and how we want to be seen.  We live in a time and a society that is very tolerant of individuality (piercings, tattoos, dreadlocks, shaven heads, hemlines of all lengths, necklines of all depths). But we are  still judged by our appearance. We can use our appearances and garb to get ahead,  and to achieve our goals. We may be masquerading but the truth catches up with us. At the end of the day the world turns and things probably work out as they should. But- it’s probably more comfortable to wear the clothes that are real rather than dress up as someone else.