VaYeilech- And He Went

Our haftarah is a combination of readings from Hosea, Micah and Joel, known as Shabbat Shuva. The reading begins, “שובה ישׂראל Return, Israel, to the Lord your Gd…”

This haftarah is always read on the Shabbat before Yom Kippur. As in the painting above, people from all the corners of the world gather to hear the shofar and pray.The

The Torah reading is “VaYeilech”, in which Moshe continues his farewell to the children of Israel. The nation is in the desert, ready to enter the Promised Land. Moshe is standing before them and wishing them strength and courage as tey continue into Canaan. 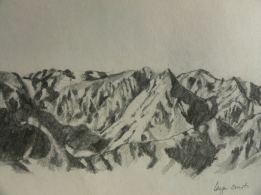 Moshe spent much of his life leading this nation out of slavery and to  freedom. He started with their parents and grandparents in Egypt and continued with this generation and their children in the desert. Chosen by Gd he led them through wars, drought, and internal revolts. He began the journey with his brother Aaron and his sister Miriam but they both died. At this juncture Moshe was the lone leader ready to appoint a successor. It seems that as life shifted Moshe’s emotions shifted too. In VaYeilech he sounded more like a father than he ever had before.

He began by saying, “ I am 120 years old today. I can no longer go out and come in. The Lord told me, “You will not cross the Jordan.”“  Moshe continued by telling the nation that Gd would continue to guide and protect them. Three times in this parsha we read the words “חזק ואמץ“,  “be strong and have courage”. Moshe was aware they depended on him and that however much he himself wanted to finish the journey with b’nei Yisrael he couldn’t.

With these words he gave the nation guidance for the future- words to carry in their hearts, recognition of their potential, and strength to continue.

Moshe knew his journey had ended. He had led an incredible life, devoting himself to Gd and His people. He knew that he had not been perfect but his entire life was dedicated to carrying out what he knew his purpose was and doing it in the best way possible.

In these days between Rosh haShana and Yom Kippur that is part of what we should think about. This is a time to consider what our mission in life is and to carry it out in truth and an open heart.

Have a meaningful fast.

I wish you, your family and friends a year of health, happiness and peace,