VaYeilech- And He Went

Our haftarah is a combination of readings from Hosea, Micah and Joel, known as Shabbat Shuva. The reading begins, “שובה ישׂראל Return, Israel, to the Lord your Gd…”

This haftarah is always read on the Shabbat before Yom Kippur. As in the painting above, people from all the corners of the world gather to hear the shofar and pray.The

The Torah reading is “VaYeilech”, in which Moshe continues his farewell to the children of Israel. The nation is in the desert, ready to enter the Promised Land. Moshe is standing before them and wishing them strength and courage as tey continue into Canaan.

Moshe spent much of his life leading this nation out of slavery and to  freedom. He started with their parents and grandparents in Egypt and continued with this generation and their children in the desert. Chosen by Gd he led them through wars, drought, and internal revolts. He began the journey with his brother Aaron and his sister Miriam but they both died. At this juncture Moshe was the lone leader ready to appoint a successor. It seems that as life shifted Moshe’s emotions shifted too. In VaYeilech he sounded more like a father than he ever had before.

He began by saying, “ I am 120 years old today. I can no longer go out and come in. The Lord told me, “You will not cross the Jordan.”“  Moshe continued by telling the nation that Gd would continue to guide and protect them. Three times in this parsha we read the words “חזק ואמץ“,  “be strong and have courage”. Moshe was aware they depended on him and that however much he himself wanted to finish the journey with b’nei Yisrael he couldn’t.

With these words he gave the nation guidance for the future- words to carry in their hearts, recognition of their potential, and strength to continue.

Moshe knew his journey had ended. He had led an incredible life, devoting himself to Gd and His people. He knew that he had not been perfect but his entire life was dedicated to carrying out what he knew his purpose was and doing it in the best way possible.

In these days between Rosh haShana and Yom Kippur that is part of what we should think about. This is a time to consider what our mission in life is and to carry it out in truth and an open heart.

Have a meaningful fast.

I wish you, your family and friends a year of health, happiness and peace,

The painting above is part of my “haftarah series”, in a style inspired by Marc Chagall.  Images from the haftarah text appear in the picture. I painted challah (to represent feeding the poor and oppressed) observing Shabbat, and “raising your voice like a ram’s horn”. (ch 58: 1) The blues evoke “A spring whose waters will not fail” (ch 58:12) and there is “light that bursts through the dawn”(ch 58: 8). Click on the image to enlarge it.

Yom Kippur is a difficult day for many of us. Not only do we have to fast  (some of us start weaning ourselves off caffeine a week early) but we go to synagogue and face ourselves. Thinking about our weaknesses is difficult, and deciding to improve realities is even more difficult.

This is a very dynamic reading. Right at the beginning Gd says, “Build up a highway! Clear a road! Remove all obstacles from the road of my people!” In energetic language the Jews are told that Gd notices them and how they are faring. HaShem sees illness and will heal them.

The message is one of an attentive Gd who knows and recognizes the challenges all people face. Fasting is mentioned a number of times. The text describes what many people do- they take advantage of their employees and those in a lower position.   It continues, “…No, this is the fast I desire: to unlock the fetters of wickedness…to let the oppressed go free…” (ch 58: 6) We are reminded that fasting must be done with the right intention.

Many of us go to synagogue on Yom Kippur filled with trepidation. It is a day when we feel our mortality and we fear for the future. It is often a comfort to be in synagogue surrounded by others who are also praying for self-improvement and/or a better year.

These are very troubling times all over the world. I won’t list all the challenges in front of us because it’s too depressing. On the positive side there are millions and millions of wonderful innovators, optimists, do-gooders, and creative givers who make the world a better place. We should all support the positive changes and work towards greater mending in the world.

Have a “positive” fast. May your year be filled with peace, health, happiness and “parnassa” (financial security) for you and your family. Happy 5775!

Sukkot is one of the many joyous holidays we celebrate. After the seriousness of Rosh HaShana and Yom Kippur the prospect of eating lovely meals in a decorated Sukkah outdoors is certainly appealing. This year, in any case, we have the possibility of wonderful weather in North America since the holiday is coming in mid- September. Other years when those of us in the north have to wipe snow off our Sukkah chairs we remember why we should be living in Israel.

This haftarah describes the dedication of the Ark, transferring it from the mishkan to the Temple. The cheruvim are described with their wings outstretched sheltering the ark. Nothing was in the ark but the two Stone Tablets from Mount Sinai- think of that!! And a holy cloud filled the Temple- so thick the Kohanim couldn’t see.

There is an exquisite book of illuminated manuscripts from Amiens, France, created around 1280. (The manuscript is currently in the British Library in London.) All the illustrations are beautiful and richly coloured. The picture featured this week is based on one of the manuscript pages.

We see the cheruvim hovering over the ark, the staves of the mishkan, the “mizbeach” (slaughtering table) for the sacrifices, complete with the ritual knives for the “shechting”.

Beside the representation of the ark with the cheruvim are two sides of a Bar Kochba coin, 134-135 C.E.

The medieval painting illustrates the words in the second day of the haftarah. The coins are a moving testament to the centrality of this holiday to the Bar Kochba fighters.

Beautifully there was another set of 36 coins found near the Temple Mount just a few short days ago, on September 9, 2013- a most auspicious day. 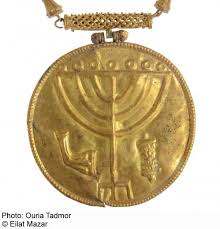 There was also a golden medallion (above) showing a menorah, shofar and Torah scroll. The treasure, found by Dr. Eilat Mazar, is about 1,400 years old. The coins and medallions that are found are tangible proof of the continuous history we Jews have had in the land of Israel. And we are blessed to be able to say, “Next year in Jerusalem” and know that we can be in Jerusalem even earlier- this year!

Do you have a theory as to why Bar Kochba chose to use the symbols of the Temple and the four species of Sukkot on his coins? What do you think of the depiction of the “cheruvim” with their faces and colourful wings? I’m interested to read your comments and ideas.

We read the Book of Jonah in its entirety on Yom Kippur in the afternoon. It’s a great story, one of those that can be used as a bedtime adventure story to tell the children. From storms at sea to getting swallowed by a “whale” to a gourd that blossoms in one night, there are many exciting events. The best known of the adventures is depicted in the lyrical painting above. We see two sailors in a merchant ship. They have thrown Jonah over the side of the boat and he’s being swallowed by a giant fish. It is  based on an illustration from the Kennicott Bible, Spain, 1476, painted by Joseph ibn Hayyim.

Jonah says, “I know that you are a compassionate and gracious God, slow to anger, abounding in kindness, renouncing punishment. Please, Lord, take my life for I would rather die than live.”  God recognizes Jonah’s anger and his inability to understand God’s forgiveness.

There are a few lessons taught in this haftarah. One is the lesson of true repentance. The people of Ninevah put on sackcloth and ashes. Then they fasted and prayed, and vowed to turn from their evil ways. They were forgiven because their prayers were sincere. We learn that when true repentance  for past deeds involves sincerity and honesty.

Another lesson is that of forgiveness. God created humankind and is waiting to see the goodness and uprightness of humanity. Jonah was upset and had a sense of loss when “his” gourd withered up- even though he had slept under it for one night. The gourd was a metaphor for God’s relationship with humanity. If Jonah was sad at the loss of “his” gourd- which he didn’t create, how much more would God be bereaved by the destruction of an entire community. The lesson of the gourd as a metaphor for an entire community can also teach empathy and forgiveness- or the concept to picture ourselves in someone else’s shoes. Jonah had to realize that the people of Ninevah had as much right to repent and live as he, Jonah had. Once we remember that we are equal to others in the world we can move on and sympathize with, empathize with and, and help others we may have formerly ignored.

On Yom Kippur we have 25 hours in which we pray, reflect and think. We have the time to consider our relationships and our behaviours. Yom Kippur is a gift for thought and an opportunity for forgiveness and acceptance.

This is a great opportunity to speak to our children or friends and reflect on how, if we are a little more forgiving, patient, and understanding, we can make the world a better place.

Have a meaningful day in synagogue and G’mar Chatima Tova- may the coming year be one of health,  peace, and blessings.

A do it yourself happiness project.

Rosh HaShana and the days until Yom Kippur are high energy and high anxiety for some of us. Ultimately we want our friends, relatives-  and ourselves- to have a happy, worry free, healthy, peaceful, year.  I adapted some blessings wishing for those exact things, wrote them in Hebrew and English, and designed a pop-up New Year’s card that you can make yourself.

Fold the sheet in half lengthwise.

Take your page and cut along the solid line through both halves of the paper. DO NOT cut through that blank space in the centre of the half circle near the words “without any”.

Now you have cut the shape of a pomegranate.

Fold the page in half widthwise. The message “Shana Tova u’Metukah” (in Hebrew) will be on one side and all the text will be on the other.

Fold the page as shown above.

Pull the pomegranate gently towards you.  The pomegranate should extend out and the rest of the card folds in the opposite way. Does that make sense? So, below you can see all the steps.And here is the ultimate greeting!

So get out the honey cake and a cup of tea, print up a couple of pages from “Model 1” and with just a pair of scissors a piece of paper and some patience you can wow your friends and impress your family with a 3-D card! Have a wonderful New Year! Good wishes from me and my family!